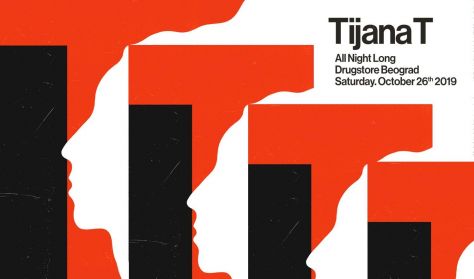 Meanwhile, in collaboration with Drugstore, Tijana T has started her own party series „Voyage To Belgrade“, performed for the cameras of Boiler Room for the fourth (and probably most epic) time, and talked to Gabriel Szatan for Resident Advisor’s prestigious series of articles „The art of Djing“. This interview put her in the company of Derrick Carter, Jeff Mills, Vladimir Ivković, Paula Temple and Eris Drew to name a few who RA featured so far. Somewhere inbetween publishing this event online and the actual party on October 26, Tijana will program the final day of Apgrade festival for which she invited the living legend that is Moodymann, to perform in Belgrade for the first time. As the true ambassador of Belgrade nightlife, Tijana preaches about the imporance of dance in Belgrade in her lectures worldwide, thus fullfilling a detail from Moodymann’s Red Bull interview/manifesto that a DJ has to represent his city.

Yeah, she’s dilligent and commited. Yeah, she is a former journalist so all the promo part comes naturally to her. But her true secret is: The redhead is in love with the crowd as much as she’s in love with music! She goes through all this before we wake up so she can feel happier to be safe up here with us.