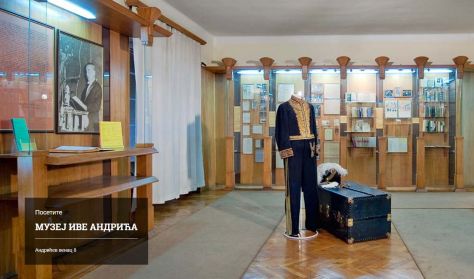 Ivo Andrić’s Memorial Museum was established in 1976, at Andrićev venac 8, where the writer had lived with his wife Milica Babić since 1958. The authentic setting and apperance of the entrance hall, drawing room, and Andrić’s study has been preserved.  more

·         Groups: On every 10 visitors, a group gets two free tickets. This does not refers to concessions.

·         Free of charge: every last Saturday in a month, children under 7 years, disabled visitors with escort, MDS, ICOM, ISIC, and Euro26 members.

Ivo Andrić’s Memorial Museum was established in 1976, at Andrićev venac 8, where the writer had lived with his wife Milica Babić since 1958. The authentic setting and apperance of the entrance hall, drawing room, and Andrić’s study has been preserved. A permanent museum exhibition had been set up in the adapted space, and it chronologically follows life and work of the Nobel’s Prize laureate. The original museum materials from Andrić’s Legacy are included, such as photographs, documents, artistic and personal objects, books and magazines, and decorations.

Ivo Andrić (Travnik 1892- Belgrade 1975) was one of the most important Yugoslav writers. He was born in Travnik, raised in Višegrad, educated in Sarajevo, Zagreb, Vienna, Krakow, and he had been imprisoned by the Austro-Hungarians because of his involvement with the Young Bosnia organization. He came to Belgrade in 1919, and started his diplomatic career, which would last untill the Second World War. In the meantime, he had defended his Doctoral Degree in Gratz, in 1924, with the subject connected to the philosophical sciences. He is the author of several important novels, many works of narrative prose, and poetry of lyrical and philosophical character, as well as, essays and critiques. He received the Nobel’s Prize for literature in 1961. His most prominent novels (The Bridge on the Drina, The Maiden, and Travnik Chronicles) were written in Belgrade, during the German occupation between 1941 and 1945.

Get informed about the best programs! When click on "SUBSCRIBE" button, user accepts to receive Tickets.rs e-mail news.