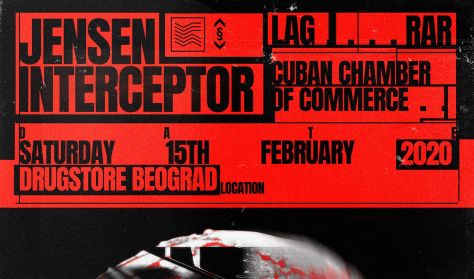 "I got the poison, I got the remedy
I got the pulsating rhythmical remedy"
Prodigy from the song Poison

"I got the poison, I got the remedy

I got the pulsating rhythmical remedy"

Prodigy from the song Poison

There simply could not be a better way forMusic Reactionsto jump into 2k20 than this! For our first event of the year atDrugstore Beogradwe're bringing you long waited electro masterJensen Interceptortogether with always on pointLag, accompanied with our eclectic boyRARand talented, young and wildCuban Chamber of Commerce. This line up is simply fire!

Jensen Interceptoraka Mikey Melas, born in Australia, now well know world wide for his versatile brand of techno. Year after year Jensen has consistently kept up with the elite at top speed. He's production is simply impeccable, and if there's a bad track by JI we didn't hear it! With his selection ranging from Detroit Electro & Miami Bass to rolling Italo, thunderous 90's Breaks and driving EBM, Jensen's audience's are promised a sonic journey like no other. Bringing a unique and powerful performance to every club and warehouse around the world - Jensen Interceptor: Engage clutch, shift into top gear.

Lagaka Miloš Martinov is a perfect example of slavic techno quality! Promoter of the underground culture, a DJ and a respected producer - Serbian-born Lag is the on the forefront of the new wave of techno artists. It is easy to notice from his sound that he did not take the usual route on his musical journey. He chose techno to be the host for his creative discharge, while always incorporating a certain dosage of his previous musical life to his current work. Grit, rhythm and attitude are his main tools as he blends them into his music, creating a potent combination which enchants, moves and unifies.

RARaka Rajko Ristanović is one of the Music Reactions organization founders. RAR started collecting records back in ’99 when he also started DJ-ing and making music. At the beginning of 2000’s, during “second techno wave” in Belgrade, he was a part of Poems Music organization (along side two friends) when they generated a lot of attention performing and organizing underground techno parties in Belgrade clubs. He’s against “framing” music historically and by genre. In his sets you can hear tracks in range from Detroit techno classics full of harmonies and broken beats, over electro, ambient, house to contemporary and experimental techno.

February 15th will be a perfect night to tryout some new moves on the dance floor. Burn baby, burn!